When you travel in Japan, bicycle is one of the most enjoyable way to see around both a city and nature. Especially some cities like Osaka and Kyoto are not too hilly and you don’t need too much hustle.

But once you rent a bike and start wandering in a city, you would be confused to find the traffic rule of bicycle, as you see so many cyclists biking too freely.

Japanese people are said to be good at following rules but somehow not those of bicycles (probably because it’s not something we learn at school). And even though the rule is getting stricter these days, it’s not controlled so well as cars and motorbikes.

However, if any accident occurs and you injure somebody without following the rule, you might have to pay a hefty fine or be sent to jail.

To avoid any trouble, here you check the basic and official rule of cycling before you get started for your bike trip.

Bicycles are taken as vehicles, so the basic rule is the same as cars. Here in Japan cars go on the left, so cyclists also must keep left as well.

Don’t be surprised when you see so many people cycling on the right side of roads, or even in the middle. They think it’s ok to cycle on any side of the roads unless any inconvenience occurs, and even police don’t check it so often unless it’s a big avenue.

HOWEVER, you must keep left if you don’t want any trouble. This is the safest way.

As bicycles are taken as vehicles, basically you must cycle on roadways.

Nowadays there are some bicycle lane pictures on roads, especially on big avenues, and you see which lane cyclist must take. 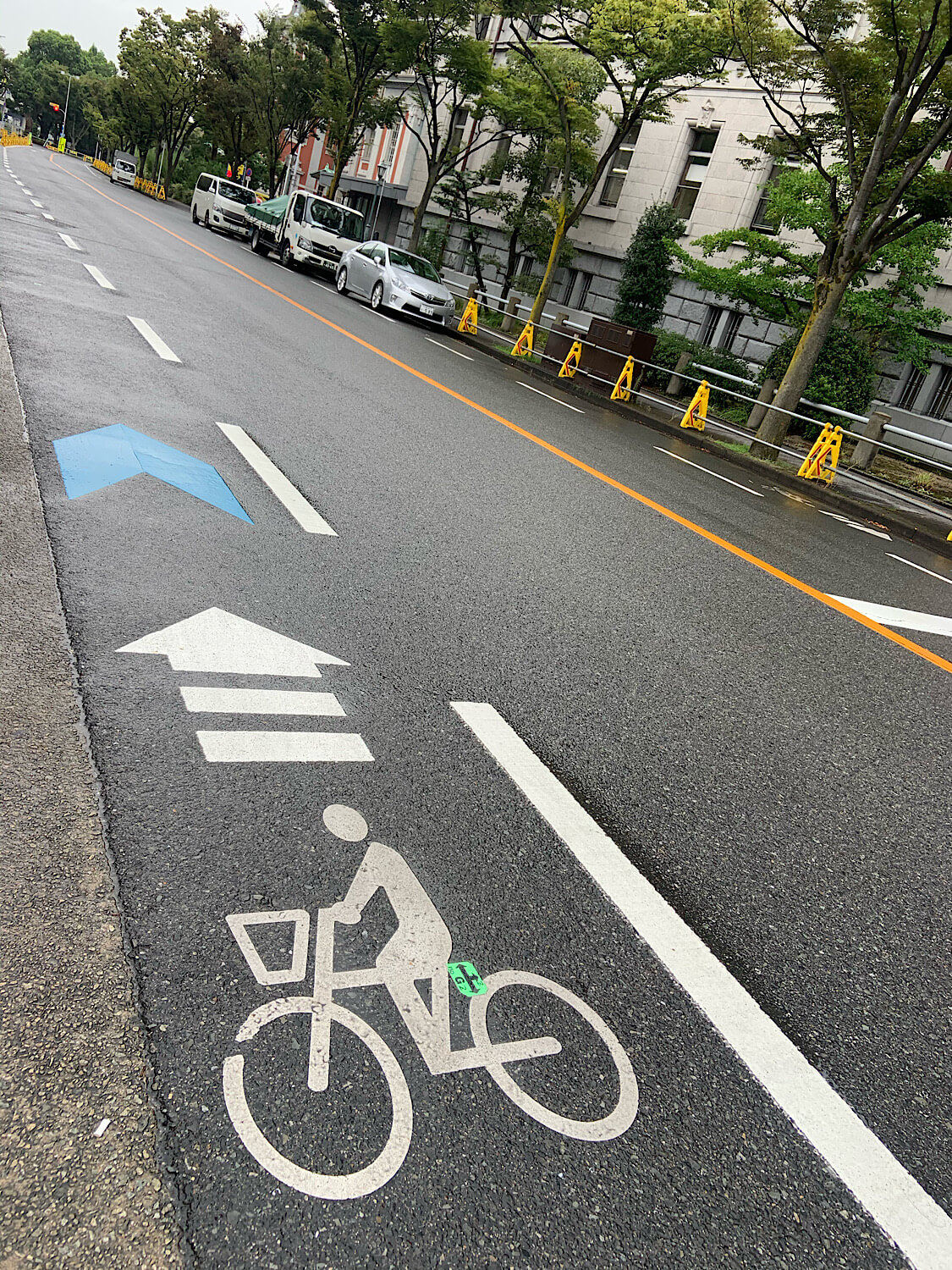 However, there are some exceptions. 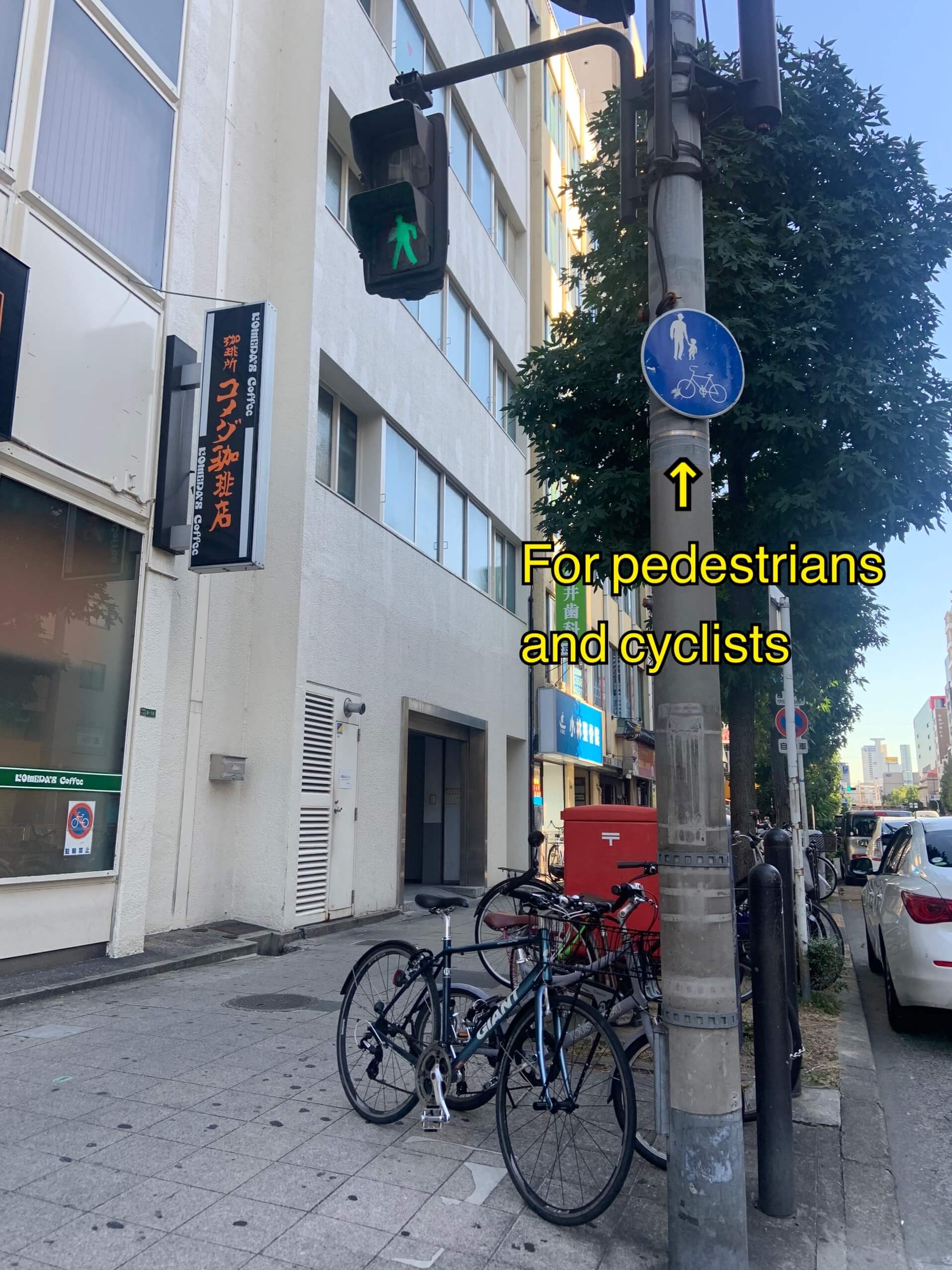 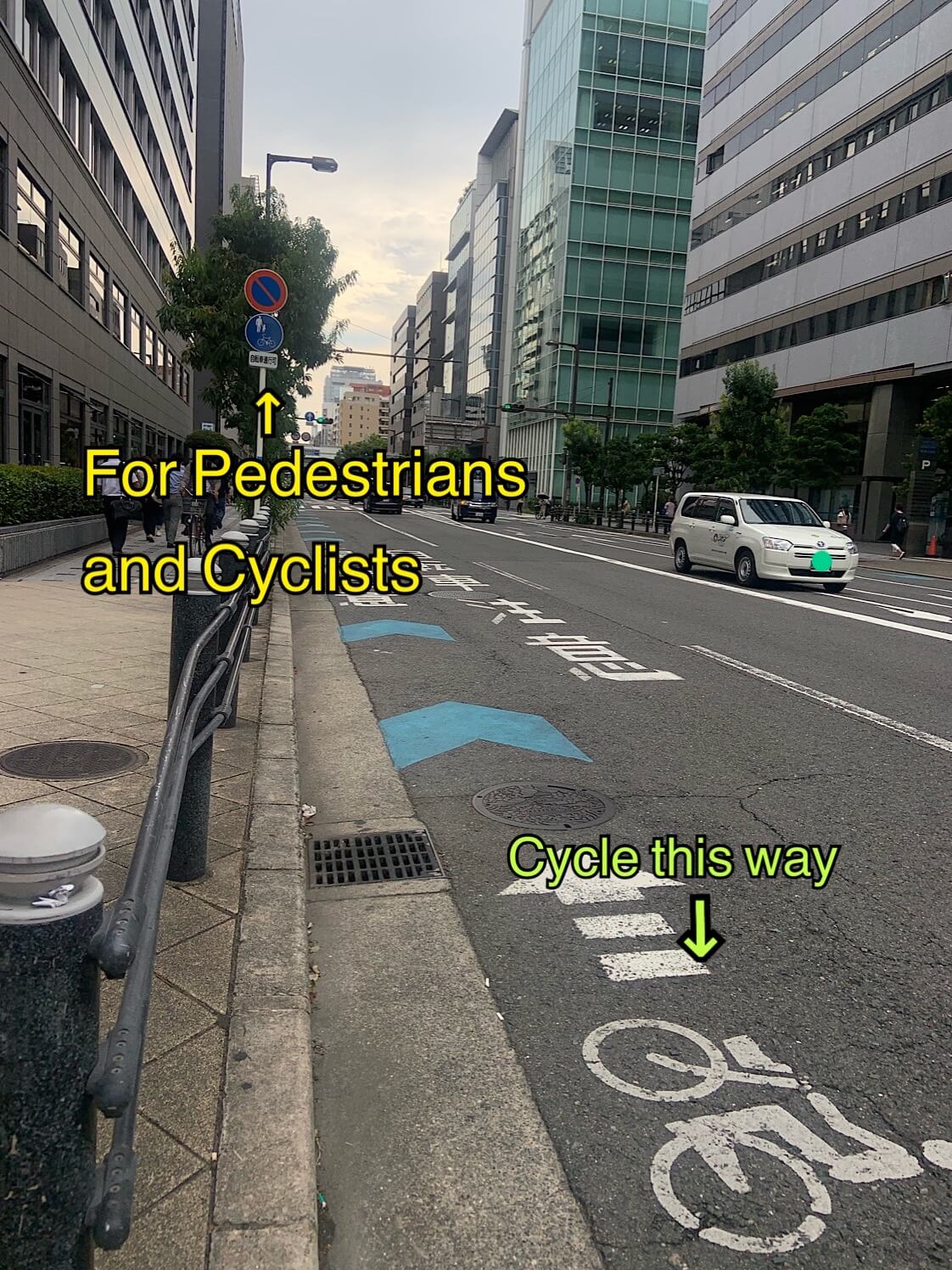 In this case, it’s better to follow the roadway.

This picture was put on just recently (since 2010s), and originally the roads are not constructed in consideration with cyclists.

What’s annoying is often you see many cars parked in this type of avenue and sometimes a bus at a bus stop would block you.

Well, it’s not really fair, but anyway follow the lane with the bicycle picture basically.

Basically you should follow the signals for vehicles, but sometimes you see a signboard and the picture on the road as below (could be either of them only). 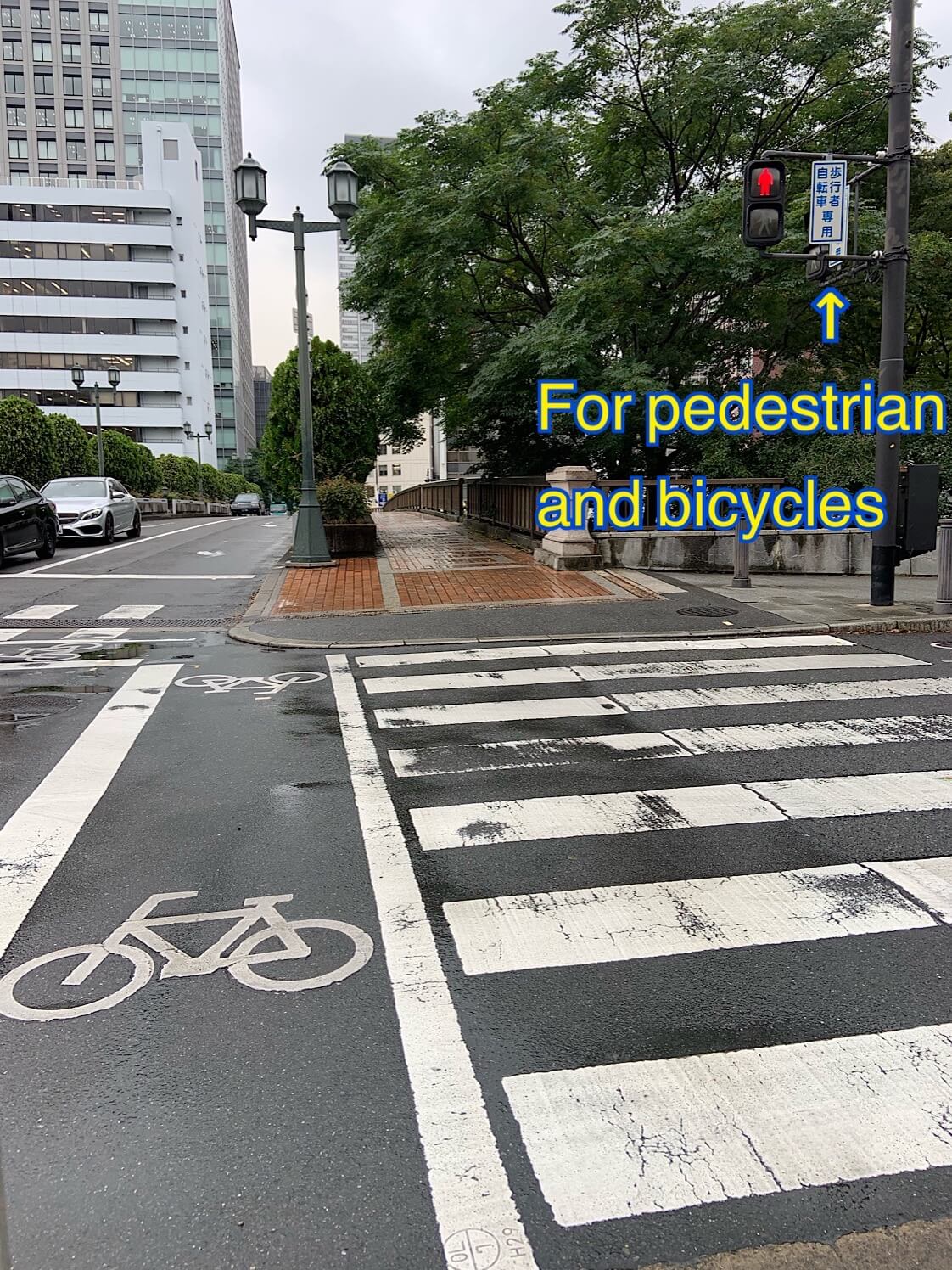 Then you cross the road at the same time as pedestrians.

Honestly, Japanese cyclists often follow signals which is safer and more reasonable for them even though sometimes it’s not the exact rule. If you can’t recognize the signboard in Japanese and you want to make sure, probably it’s safer to follow the pedestrian signals, especially on big streets. At least as long as you push your bike, you’re taken as a pedestrian. 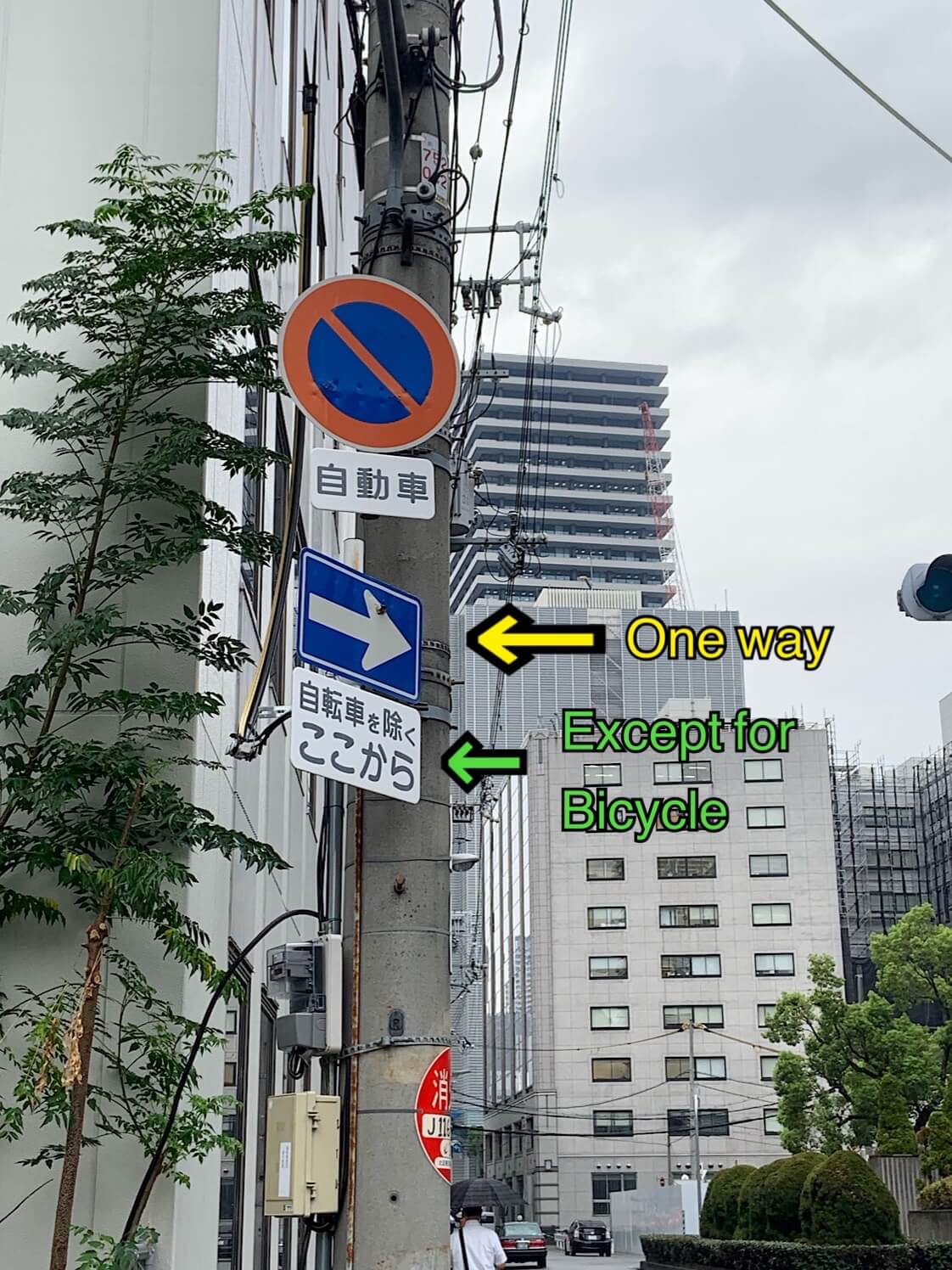 a.  Don’t cycle after drinking alcohol (It’s fine to push your bike).

b. No Double Riding (some bicycle for kids is exception)

c. Don’t cycle side by side

d. No smartphone when cycling

When police finds you doing these below, sometimes it’s only warning, but now the regulations “a” and “d” are getting more strict and you would be fined or jailed .

When you see this signboard, you shouldn’t park your bike. 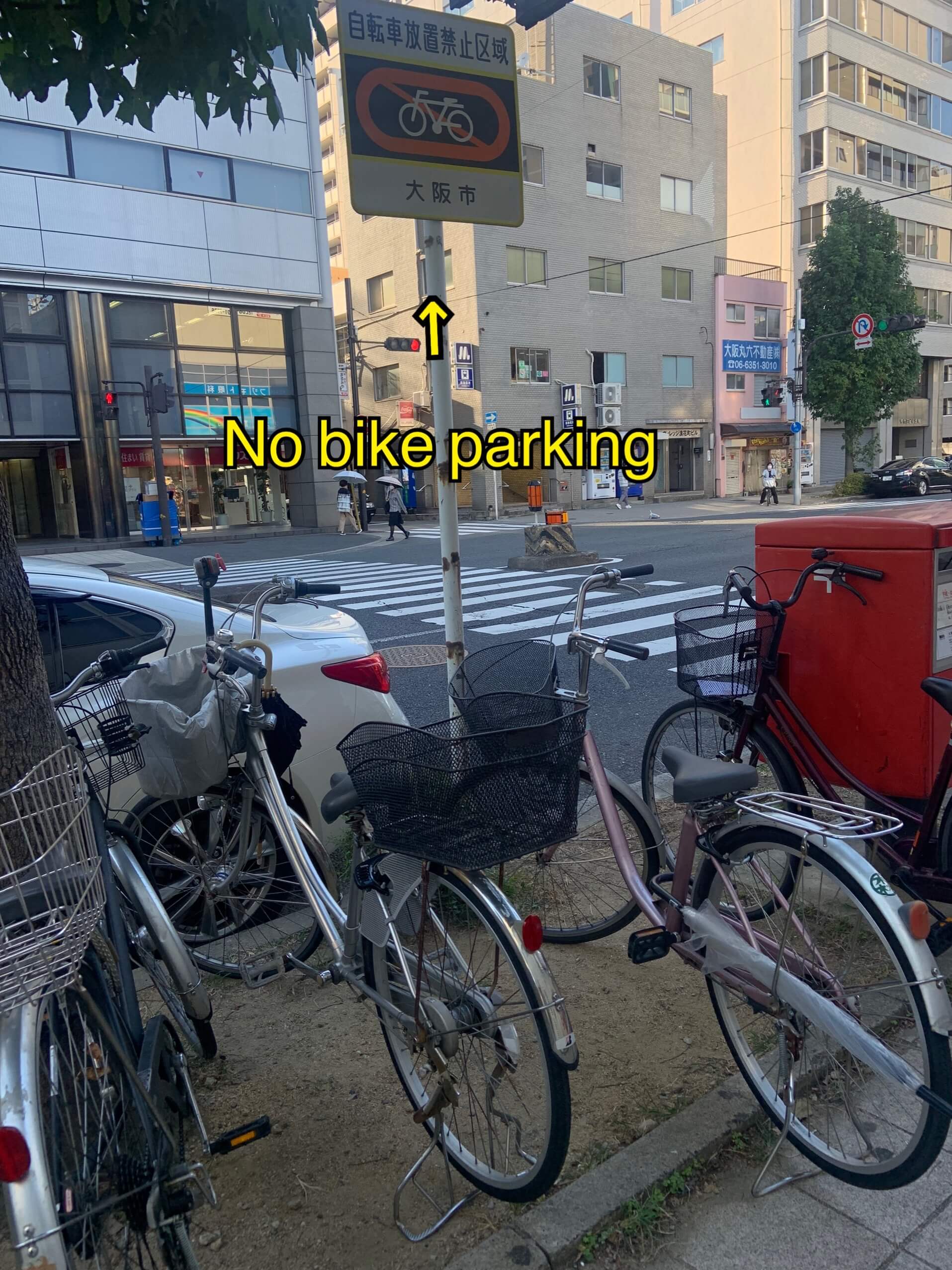 Sometimes you get just warning but in the worst case, your bicycle will be taken away and you have to go to get your bicycle back taking a long way (often the site is a bit isolated from the center), and have to pay fine.

Especially when you rent a bike, parking your bike at a parking lot is absolutely recommended.

Well you see a lot of bikes parked at no-parking area, but don’t think it’s always safe to do that and you never know when your bike is taken away or stolen. Take the safest way all the time ! 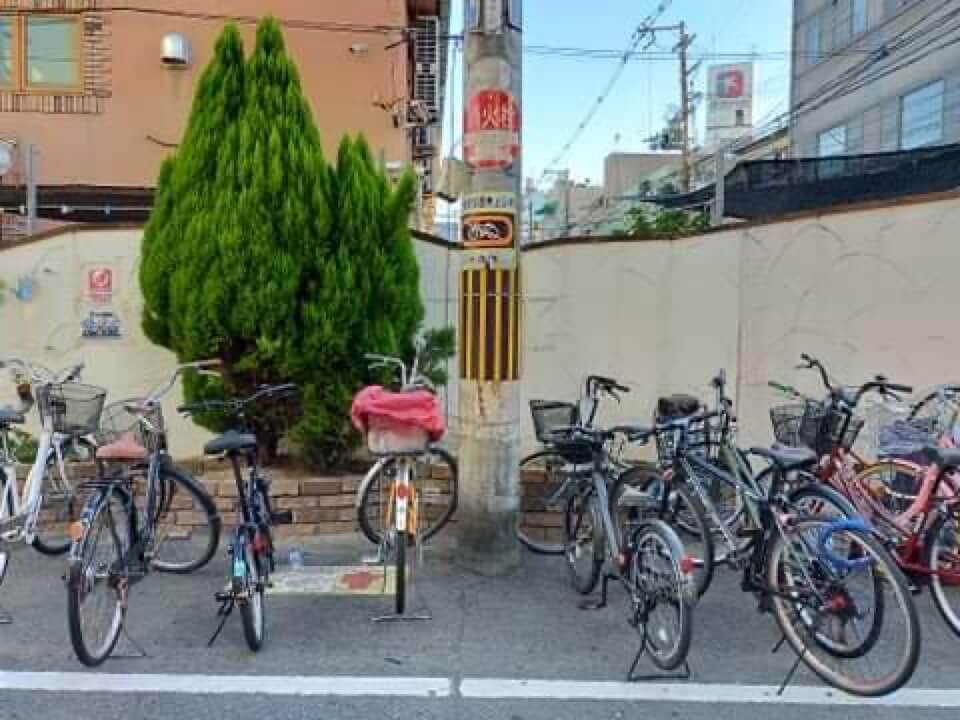 Helmet is not obligatory to wear but helmets for children is recommended (it’s said parents has “duty to make effort” to let their kids wear a helmet so I say it’s recommended).

Lights must be turned on when it’s dark. You can see cars with lights but cars cannot see you without lights !!

Also check where bicycles are not allowed to go through. For example, some parts of main streets such as Kawaramachi street and Shijo street are no-bike zone as well as some shopping streets in Osaka like Shinsaibashisuji and Tenjinbashisuji （often night time is fine). 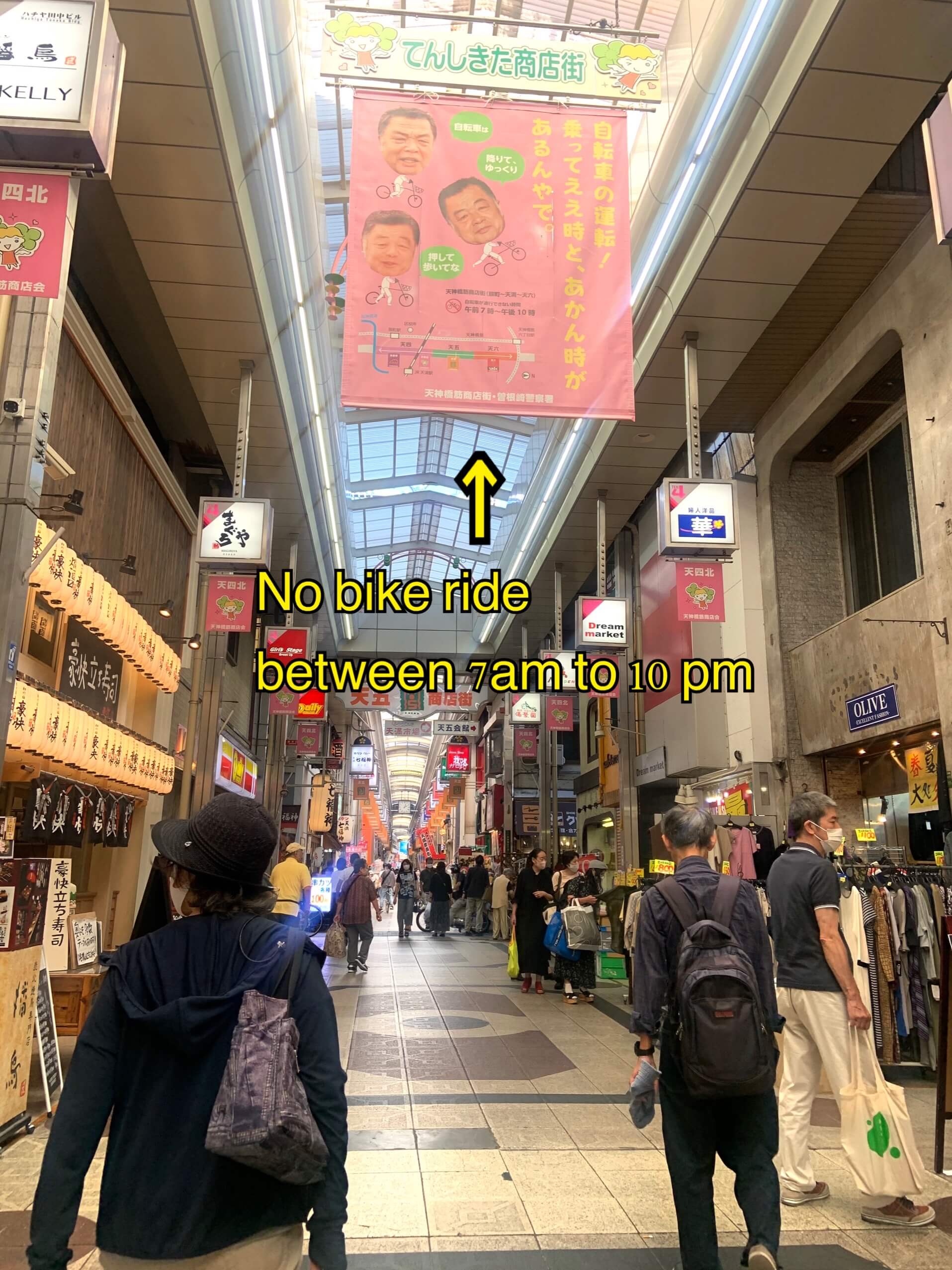 These are the basic rule of bicycle in Japan and you might feel it’s partly confusing. And when you don’t understand the signboards in Japanese, it’s difficult to follow the right rule.

What you have to understand is probably these words above. Of course you have to follow the rules but don’t hesitate to travel by bike as it gives you another way to find something fun when traveling in Japan !

Any cookies that may not be particularly necessary for the website to function and is used specifically to collect user personal data via analytics, ads, other embedded contents are termed as non-necessary cookies. It is mandatory to procure user consent prior to running these cookies on your website.